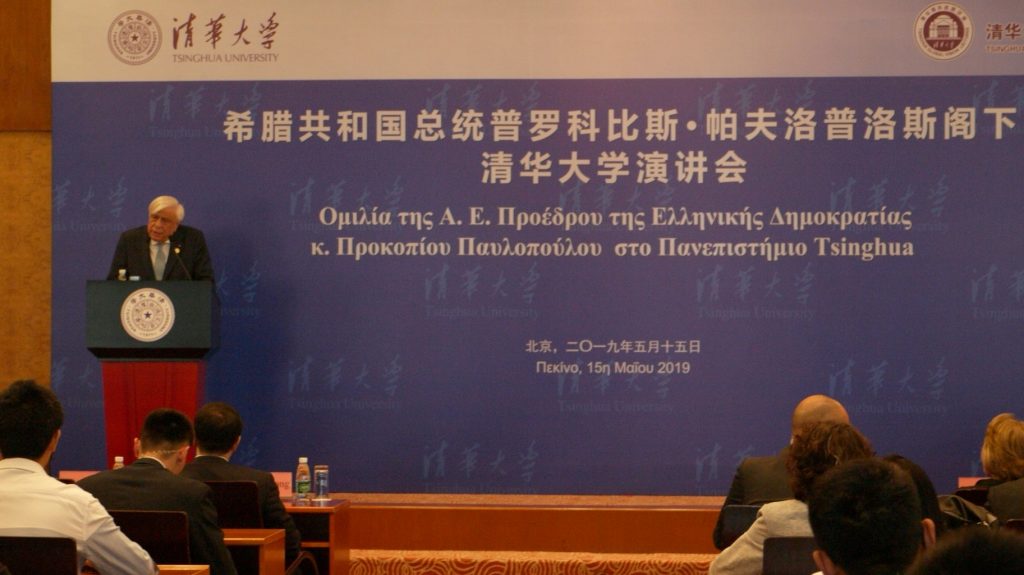 The President of the Hellenic Republic Mr. Prokopios Pavlopoulos visited Tsinghua University in Beijing on 15 May 2019, on invitation, accompanied by Mr. Panos Laskaridis, President of the Aikaterini Laskaridis Foundation and Mr. Konstantinos Mazarakis Ainian, General Director of the Foundation.

Within the framework of the “Marilena Laskaridis” Chair of Classical and Modern Greek Studies, funded by the Aikaterini Laskaridis Foundation, the President of the Hellenic Republic gave a speech on the contribution of the Greek language to the dialogue of cultures. In his speech, he referred to the differences between Eastern and Western Culture as depicted by the French intellectual André Malraux in his essay in 1926 and concluding to the statement that “Greek Culture, since the beginning, it is the most appropriate and suitable for a fruitful Dialogue between Cultures!”.

As the President has said, “the Greeks and the Chinese are heirs of two emblematic civilizations, which go back for centuries, rightly claiming their respective share of eternity “. Because, as with all man’s creations, this is the case with civilizations; they are evolving, but the great ones have the privilege of relying on deep roots that stand in the passage of time. This also applies to both cultures.”

Concluding, the President stressed that “Intellect, Education and Culture do not characterize the nations as big or small, but only as “brother nations”. That is why […] the teaching of Greek language in China, which, with so much wisdom and affection, cultivates your University, is, beyond the self-evident value of its learning, a real contribution to the Dialogue between our two major cultures.”

The Aikaterini Laskaridis Foundation continues promoting Greek Letters abroad, supporting the Visiting Professor’s Chair at Tsinghua University and taking actions to bring countries closer together, such as the “China, Greece and the Eastern Mediterranean Conference” held on 10 and 11 May at the Foundation, in Piraeus.