China and Greece. From Ancient Civilizations to Modern Partnerships 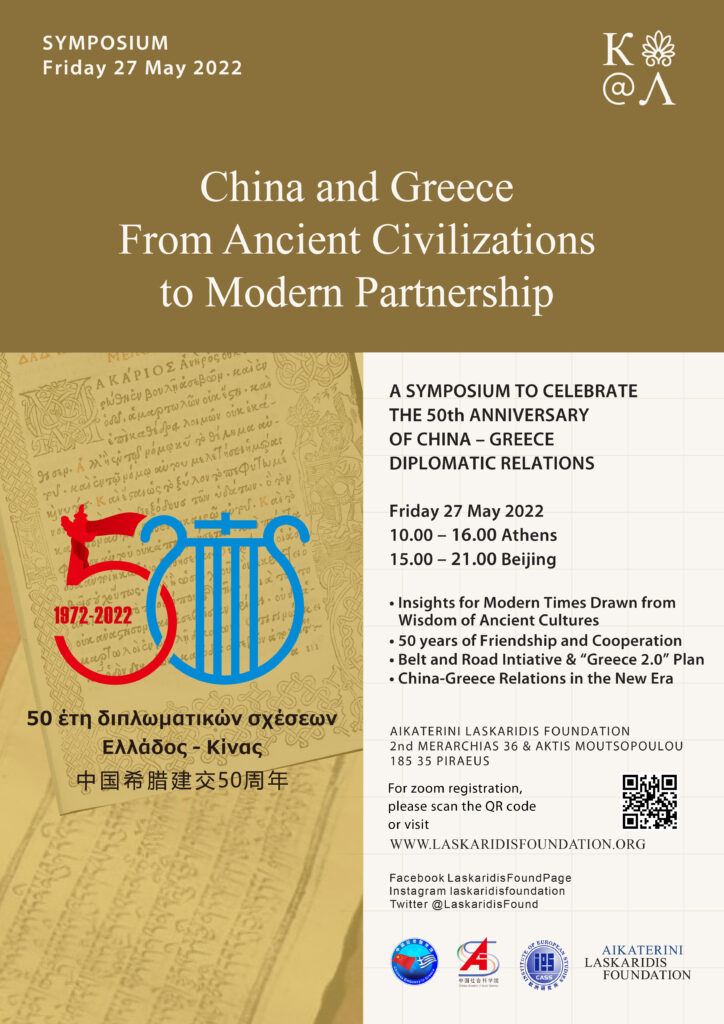 The Symposium “China and Greece: From Ancient Civilizations to Modern Partnership” was held on Friday 27 May, organized by the Aikaterini Laskaridis Foundation in collaboration with the Chinese Academy of Social Sciences, on the occasion of the celebration of 50 years of full diplomatic relations between China and Greece, which were established in 1972.

The event attended prominent personalities of politics, diplomacy and science from the two countries, sealing with their presence the link that connects two cultures with unique history for building modern prosperity. The theme of the Symposium was evolved around culture and cultural interaction, economy and investment, as well as the development of bilateral relations.

On behalf of the Greek state, a message was sent by the Deputy Prime Minister, Mr. Panagiotis Pikrammenos, who spoke about the friendship ties that have been built between the two countries, for their strengthening on the occasion of the current Greece-China Year of Culture and Tourism, the Common Action Plan for Tourism, recently signed between the countries, but also for the participation of Greece in the “Belt and Road” initiative, for the development of trade relations between East and West. The Minister of Development and Investments, Mr. Adonis Georgiadis, in his message paid tribute to China and its history. “We share a common past over the centuries and I’m sure we will share a common future.” He pointed out the importance of Chinese investments that have been made to date in Greece, while pledging to facilitate new investment efforts. After referring to the great social and economic changes that have taken place during the last 50 years in the two countries, the Deputy Minister for Economic Diplomacy and Openness Mr. Kostas Fragogiannis spoke about the new dimension that has been given to the relations between China and Greece with the development of the “Belt and Road ” initiative, while he pointed out the investment opportunities offered by Greece, having entered a period of stability and growth, inviting new investors from China to trust the country. Mr. George Iliopoulos, Ambassador of Greece to China, in his message referred – among other things – to the mutually beneficial activities in the fields of shipping and energy, he spoke about the cooperation of Greek universities with Chinese Universities, and he made a reference to the difficulties faced by Greek students of Chinese educational institutions in order to return to China to continue their studies. All the representatives of the Greek side referred to the successful investment of COSCO in the port of Piraeus, which is bearing fruit, already presenting spectacular growth.

On behalf of the People’s Republic of China, Mr. Xiao Junzheng, Ambassador of China to Greece, in his greeting spoke about the long-term cooperation and the new dynamics in the relations between the two countries, the importance of Greece as a partner in Central and Eastern Europe and the development of mutually beneficial partnerships. Finally, Mr. Zhao Qi, General Secretary of the Chinese Academy of Social Sciences, among other, stressed the importance of Greek-Chinese relations for China’s cooperation with the European Union.

Keynote speakers of the event were Mr. Feng Zhongping, Director of the Institute of European Studies, CASS and President of China-CEEC Think Tanks Network and Mr. Loukas Tsoukalis, Professor Emeritus at the University of Athens, Professor at the Paris School of International Affairs (Sciences Po) and President of Hellenic Foundation for European and Foreign Policy (ELIAMEP). The speakers analyzed geopolitical issues and development prospects arising from the cooperation of the two countries.

The symposium is under the aegis of the Chinese Embassy in Greece.