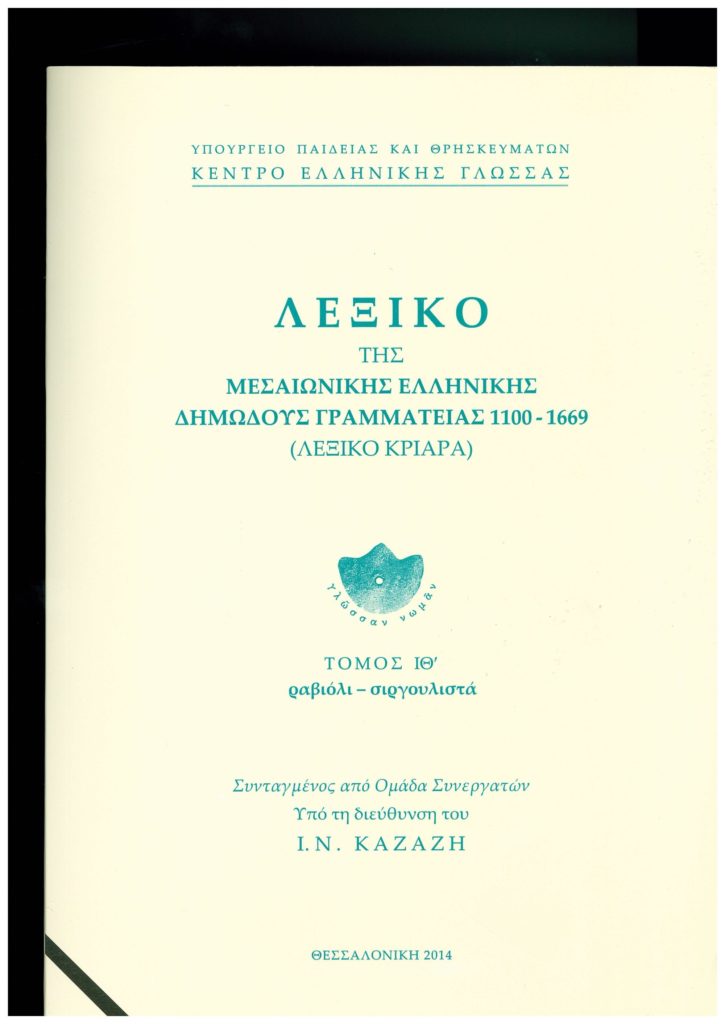 On Wednesay, 18 February 2015, the “Aikaterini Laskaridis Foundation” and the Hellenic Language Center hosted the presentation of the 19th Volume of the Dictionary of Medieval Vulgar Greek Literature 1100 – 1669, in the Foundation’s FunctionHall on 2nd Merarchias 36 & Aktis Moutsopoulou streets in Piraeus.

In the brief video introduction that followed, featuring the honorary presentation of the volume to Professor Emm. Kriaras at his home, on July 1st 2014, only a month before his passing away, the Professor expressed his deep gratitude to his colleague and friend, Mr. Kazazis, for becoming a worthy heir of the Lexicon project and carrying on his work, accomplishing the objectives they both aspired to.

During her opening address, Mrs. Marilena Laskaridou refered to her longstanding connection to the Professor, starting with her introduction to him as a student and culminating with the event in honor of the Professor hosted by the “Aikaterini Laskaridis Foundation” in October 2007. Furthermore, the Professor has donated his hugely important personal archive to the Foundation, where it is currently being processed by philologist Ioanna Romiou.

Professor Ioannis Kazazis underlined that the study of this Dictionary is essentially a study of the words’ function as currency traded throughout Hellenism in the Medieval era throughout the Mediterranean area, reconstructing that period in time before our very eyes. “This isn’t a mere exploration of a chapter in Greek history. It connects our present to a greater historic canvas, enriching it with the life and accompishments of the past. This is a fundamental act of support towards our contemporary Greek civilization during these challenging times”.

Dr. Rania Voskaki presented the way in which the Kriaras archive has been digitised and indexed in the Greek Language Portal, in order to be accessible to researchers and students, as well as readers of all backgrounds.

Professor Christoforos Haralambakis used examples from the volume to illustrate the Medieval Dictionary’s significance in analysing the correct etymology and history of words in Modern Greek, as presented by contemporary dictionaries, including that of the Academy of Athens.

Professor Theodosis Pylarinos introduced the audience to an unknown aspect of Emm. Kriaras’s work, his youthful production of poetry and short stories.