EXHIBITION “The Antikythera Shipwreck – The Adventure Continues” until 15 April 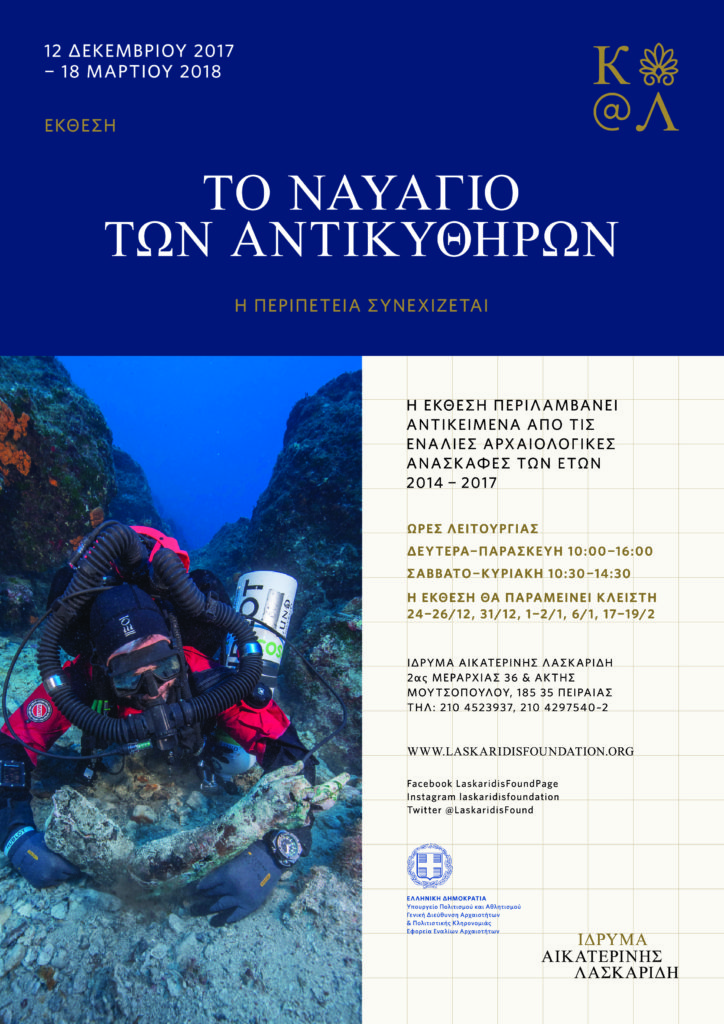 The Aikaterini Laskaridis Foundation is honored and happy to host once more ή once more has the opportunity to host the new findings from the archaeological excavations at the famous Antikythera Shipwreck, which are carried out by the Ephorate of Underwater Antiquities under the “Return to Antikythera” program. The official opening of the exhibition took place on Monday 11 December, by H.E. the President of the Hellenic Republic Mr. Prokopios Pavlopoulos, in a private event also attended by the Minister of Culture and Sports Mrs. Lydia Koniordou. More on the inauguration you can find here.

The bronze disk that “hides” a bull, a hand and a garment – pieces of bronze statues that may be under huge stone masses, a result of landslide after an earthquake – the marble slab of reddish marble from a table, as well as parts of the bronze decorations of elaborate wooden furniture, await visitors to admire them. These findings, unveiled only last September, are exposed inside tanks filled with water, as they are in the desalination phase of their conservation, and they give a new perspective to research, reviving the scientists’ expectations for upcoming great discoveries.

The exhibition includes a total of thirty-seven objects, findings from the excavations carried out in the wreck site since 2014. Among them the gold ring from the 2016 campaign, pieces of exceptional glass vases, a set of clay vases from the ship’s cargo, but also pieces of the ship itself, all objects that help the reconstruction of the most famous ancient shipwreck. The findings are accompanied by photographic material and videos from the underwater research conducted using the latest technology.

The excavation’s dig diary of Lazaros Kolonas, an archaeologist who participated in the 1976 survey by French oceanologist Jacques-Yves Cousteau and Greek archaeologists, adds a special value to the exhibition with detailed descriptions of the works and drawings of the excavation and its findings. The diary is exhibited alongside objects linked to the 1976 campaign which were recovered this year.

The ship that sank around the middle of the 1st century BC in Antikythera, carrying a unique wealth of art and technology, such as the Antikythera Mechanism, continues to surprise us and one thing is certain: the adventure continues!­­­