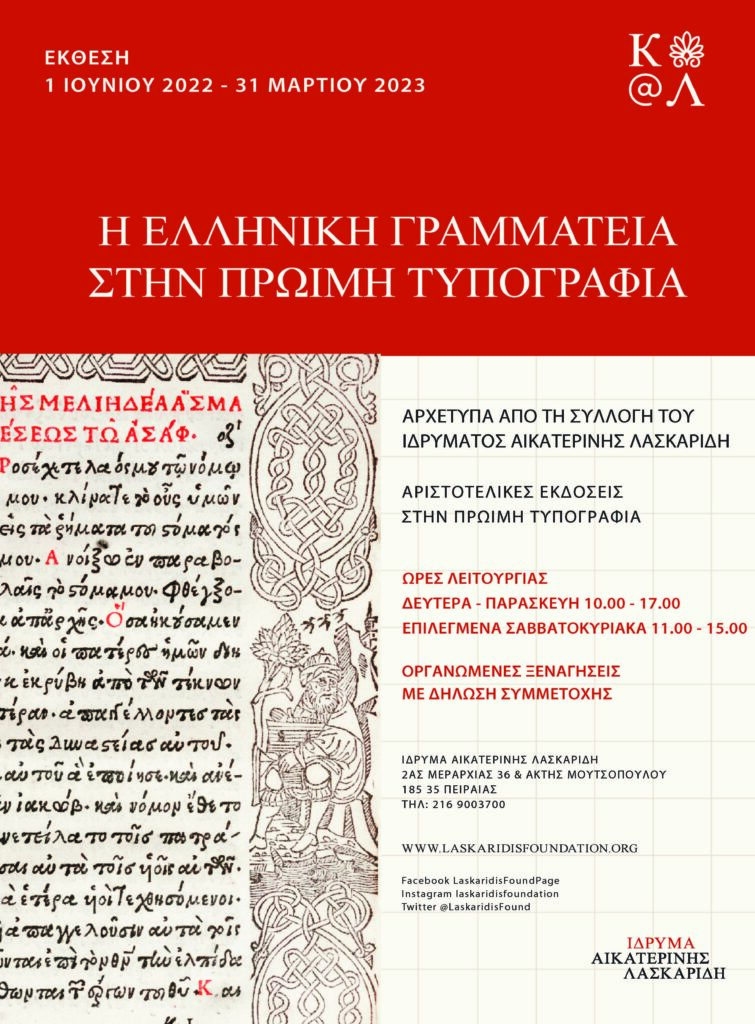 The exhibition “Greek literature in early printing” presents 42 incunabula of Greek interest, as well as 20 editions of Aristotle’s works from the 15th and 16th.

During the 15th century circa 70 Greek incunables were printed. Despite their small number, they played an important role in the dissemination and reception of Greek letters in the Renaissance and later on. Greek literature had an even more significant presence during the first century of printing through Latin translations, which were numerous and often preceded in print the Greek original.

The exhibition presents a selection of such examples from the rich collection of the Aikaterini Laskaridis Foundation, printed between 1470 and 1500, and covering a wide range of subjects and eras: from the editio princeps of Homer to late Byzantine writers.

It brings to the spotlight monumental first editions as well as the technical and artistic achievements of pioneer printers Aldus Manutius, Zacharias Callierges, Laurentius de Alopa, Erhard Ratdolt and their collaborators. At the same time, these books are presented as historical and collectible artifacts, due to characteristics they acquired in the course of their long life after the printing house, such as luxurious bindings and illumination.

Aristotle influenced Western thought more than any other Greek thinker; his works were translated, published and studied systematically and continuously. During the 15th century, his works were translated anew into Latin, while the editions of his works alone account for more than half of all translated Greek editions. Towards the end of that century, the Corpus Aristotelicum was published for the first time in the original Greek in five volumes by Aldus Manutius. This monumental edition is the central exhibit of a special tribute to Aristotelian editions, which includes books from the 15th and 16th centuries, illuminating the development of printing in the major publishing centres of Europe.

Tours: Announcements on guided tours can be found on our social media and website. Registration required.