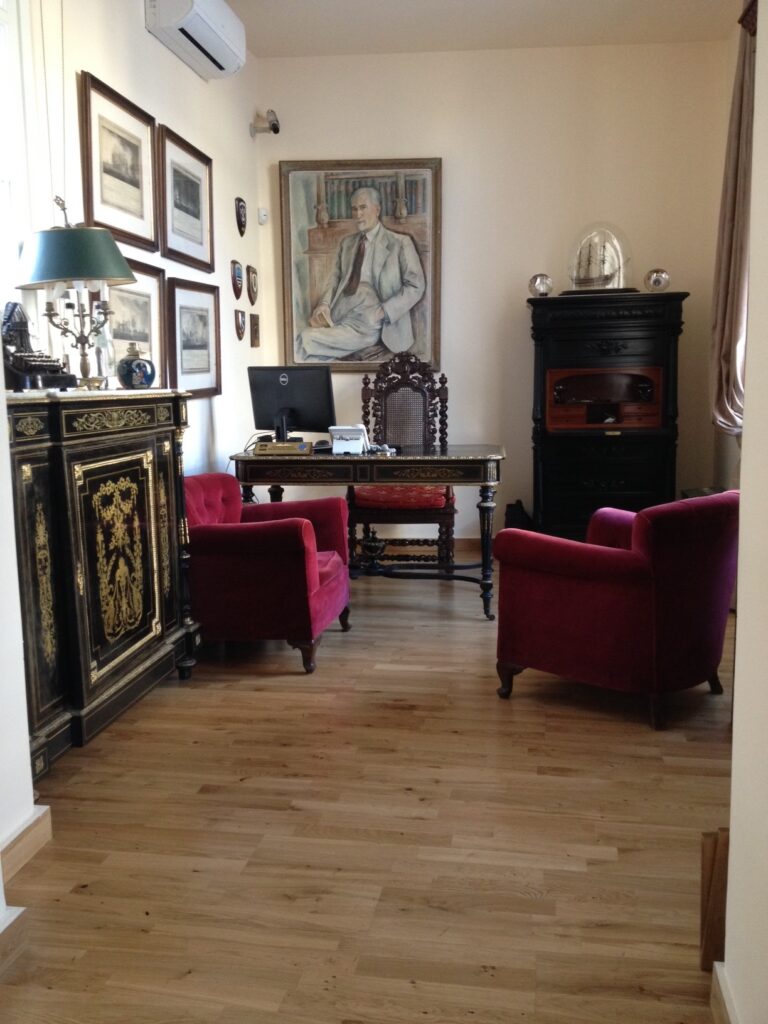 The building which houses the Foundation’s Historical Library has its own history. It belonged to Georgios Stringos (October 12, 1878 – January 13, 1956) who was a merchant, banker, broker and politician.
Georgios Stringos was born in Kranidi, Hermione. He was the son of Constantine Stringos, son of the 1821 fighter John Stringos (1790-1875) and Maria Zervos. In 1888 his family moved to Piraeus, where he grew up. In 1896, he worked in the “Bank of Athens” from where he resigned in 1902.
His passage from the Bank of Athens was quite important for his subsequent course, as he acquired useful knowledge on economics. After his resignation he collaborated with the merchant John Fragkiadi founding the company Fragkiadis, Stringos and Co., which soon became quite profitable. In 1913 he left the company and opened his own business. At his time he was considered highly educated and had a large library and art collection.
He was one of the founders of the commercial and industrial chamber of Piraeus, where he served as president; he founded the Maritime Museum of Greece. Also, he founded one of the first private banks in Greece, the Stringos Bank. He was actively involved in politics getting elected MP in 1926 and Senator in 1928. Finally he was alderman Piraeus for a long time.
He died in Athens and was buried in Piraeus. He left three children, Constantine, who died at an early age, Demetrius and Agnes, wife of Nicholas Bouropoulos.
During the Second World War, the Stringos mansion was commandeered by the Germans and used as an Officers’ Club. After the war, it was briefly used as a Navy Officers Club and in the early nineteen fifties it was bought by the French Embassy and became the seat of the French Institute of Piraeus. In 2006 it was bought by theLaskaridis family and since 2009 it houses the Historical Library of the Aikaterini Laskaridis Foundation.
The heirs of Georgios Stringos, Agni-Stringou-Bouropoulou and George Stringos, her nephew and son of Dimitrios, donated furniture that belonged to the mansion during Georgios’ time. This delicate furnishing, matches nicely with the interior design of the building as a library. The Aikaterini Laskaridis Foundation thanks the donors.
Here are some pictures of the office premises of the Historical Library, furnished with the furniture of Georgios Stringos.