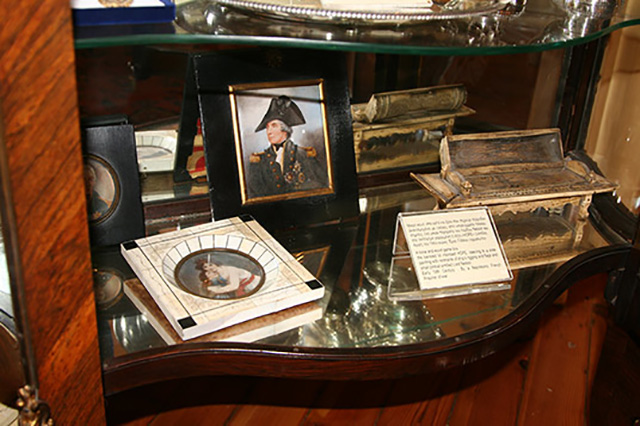 Housed in one of the city’s landmark buildings, an early 20th century neoclassical mansion, the Aikaterini Laskaridis Foundation’s Nelson Collection consists of some 82 autograph letters of Lord Admiral Nelson, dozens of contemporary newspapers commemorating Nelson’s victories, many of his Lordship’s personal items, more than 1,500 books on Nelson and the Napoleonic wars, and a number of important paintings, seascapes and engravings depicting Nelson himself, some of his battles, and his death. The Foundation also boasts an important collection of around 30 models of several warship types, made of bone or ivory, built by French prisoners of the Napoleonic wars.

Among his personal items are a pair of rings the Lord Admiral had exchanged with Emma, Lady Hamilton, various pieces from his silverware, one of his personal seals, a lock of his hair, a fork-and-knife combination his Lordship used after the amputation of his right arm, and a framed fragment of his flagship HMS Victory’s flag.

All the above have been collected over the past 30 years by P. C. Laskaridis, R.C.N.C. in various auctions or from other collectors; parts of the collection have been exhibited in London, Athens and the Falkland Islands during the celebrations for the bicentenary of the battle of Trafalgar.

The collection is part of the Foundation’s main Maritime Collection, exhibited at the same premises, which is open to the public; in addition, items of special interest and importance can be viewed by appointment only.

Below you can find full catalogues of all the collection’s items.