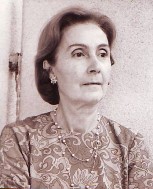 Kaiti Laskaridou was born and raised in Piraeus. She graduated from the American Women’s College and studied Economics in the Piraeus School of Commerce.

She married Konstantinos Laskaridis and gave birth to two sons, Panos and Thanasis. In the early 50s, she and her sisters Nausica Limnaiou and Mina Tornarou led a group of women in founding the YWCA branch in Neo Faliro, which aimed to care for young immigrant women from Romania, Russia and other Eastern countries during the years after World War II and the Greek Civil War.

Her progressive spirit, social consciousness and sharp mind remain inspiring examples for us all.

In honour of Kaiti Laskaridou and her work the Library was named after her to remind us of a woman whose inexorable passion continues to inspire us to this day.