Return to Antikythera: Completion of First Phase of the Project, with significant results (October 2014) 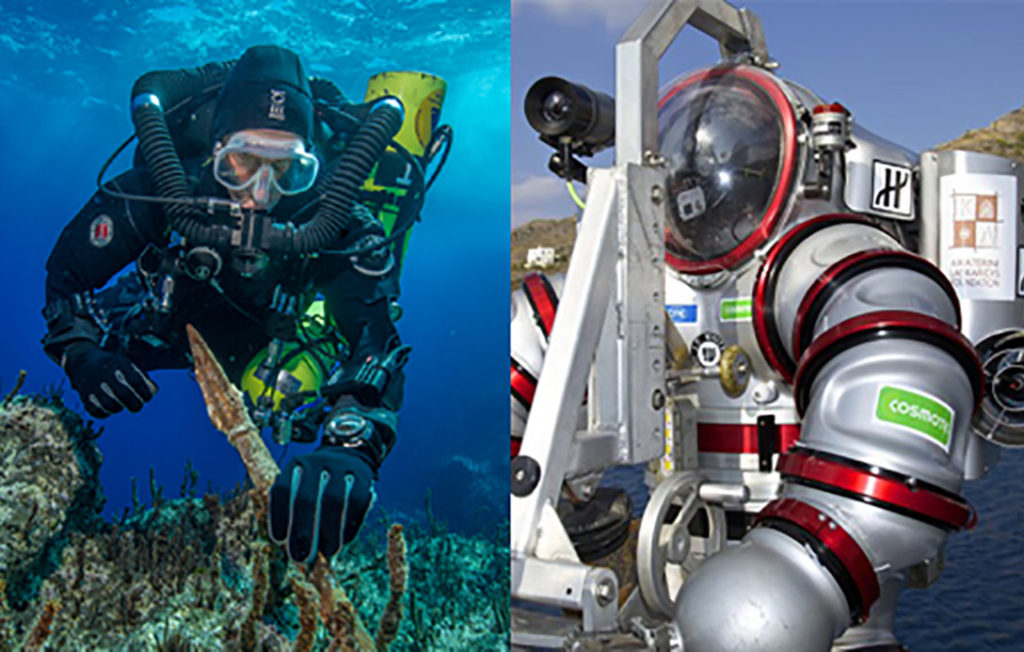 Short Description
The first phase of the underwater research on the Antikythera wreck was completed with success.
Athens, October 10, 2014
In spite of bad weather conditions, the first phase of the underwater research on the Antikythera wreck was completed with success. In the course of the project, named “return to Antikythera”, an international team of experts, under the direction of the Woods Hole Oceanographic Institution of Massachusetts important archaeological items were found and recovered. All research was conducted under the supervision of the Hellenic Department of Underwater Antiquities and support by the Aikaterini Laskaridis Foundation and other organizations.
At the head of the Woods Hole tam, is American scientist and researcher Brendan Foley. The research team also counts greek archaeologist A. Tourtas, dr. G. Bitsakis, greek and foreign divers and technical divers (M. Tzefronis, L. Mersenier, E. O’Brian, P. Short, A. Sotiriou), technicians, photographers and many more.
The mapping of the wreck was made by a specialized team of the university of Sydney (O. Pizzaro, S. Williams, C. Lees) with the use of the underwater remote operated vehicle Sirius. The project was also supported by the Hellenic navy with a team of seal divers and with HS Thetis, for the deployment of the Exosuit.
The Aikaterini Laskaridis Foundation provided the ship Glaros, that was used as mothership for the Autonomous Underwater Vehicle, for provision of living quatrers and on-site technical support.
Funding of the project was provided by funds secured by the Woods Hole Oceanographic Institution and Argo, a non-profit organization that was stood up for this purpose. Large scale funding was also provided by the swiss watch company Hublot, while other organizations and companies provided in-kind support: Greek telecommunication company OTE-COSMOTE, JF White Constructing Co.,  Swordspoint Foundation, the Costa Navarino Hotels, the families of James H. Orr, Michael Dubno and Loren Blackford, Richard and Laetitia Garriott de Cayeux and the Domestic Property Foundation of Kythera and Antikythera.
With the conclusion of this first phase of the project, the president of the Aikaterini Laskaridis Foundation said:
” It is with great joy and pride that we took part in the underwater research of the Antikythera wreck. Close collaboration between a large number of scientists from all over the world ensured success from the very beginning. With the means, that we and others, put in effect, we helped a lot in the success of a project that is important for Greece and the world. I extend my warmest congratulations to all involved.”
The scientific team had had at its disposal the most modern diving equipment, the Exosuit being the most impressive technological gem. The Exosuit is a robotic diving suit that permits safe diving to great depth for an extended time. Unfortunately, due to the bad weather conditions, diving with the suit was limited to only one day.
The research activity however was completed successfully on 7 October, in spite of the strong northerly winds in the area. During the research, very accurate topographic mapping of the wreck site was achieved, permitting the creation of a three-dimensional model of bathymetric and photographic imaging. These were incorporated in the Geoinformation system (GIS), in which were also placed all known data since 1900, including the data of the 1976 survey. On top of that, all new data, including metal detector targets that were located this year, were superimposed on that GIS map. Thus, a very accurate layout of the wreck has been compiled for the first time.
This new picture of the wreck permits us to state that there are two wreck sites, some 100 metres apart. This could mean either that the ship broke in two after smashing on the rocky coast, or that there were two ships in company that foundered together. Future research will probably shed more light in this.
The Aikaterini Laskaridis Foundation set at the disposal of the project all its infrastructure and academic capabilities for preparation and the coduct of the underwater research. In addition, scientific announcements and events related to the project will take place at the Foundation’s facilities.
The Foundation’s ultimate target is for the project to feed our edycational programmes. In this context, an interesting such programme, entitled “The Antikythera Mechanism: Astronomy and Technology in Ancient Greece”, addressed to secondary education schoolchildren is supported by members of the Antikythera Mechanism Research Project (AMRP), that has spearheaded the recent investigation and renewed interest in the Antikythera Mechanism. professor John Seiradakis, founding member of this scientific group, in October 2012,  presented at the Foundation the latest and most accurate reconstruction of the Mechanism, constructed under his guidance at the Aristoteleion University of Thessaloniki. For the video of this presentation (in Greek), press here.
Mid- October 2014, with the conclusion of the underwater research activities at Antikythera, a hot wash up was held at Kythera.  During that event, the President of the Foundation, Panos Laskaridis presented an overall recount of the activities. For a the video of this speech, press on the picture below: 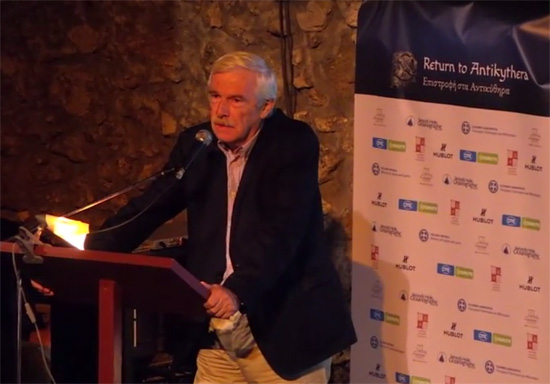 On 20 October 2014, the official Academic Announcements on the results of the project up to date and the presentation of the 2014 findings, was held at the Aikaterini Laskaridis Foundation. Public interest was great. For a short account of the Academic Event, press here.