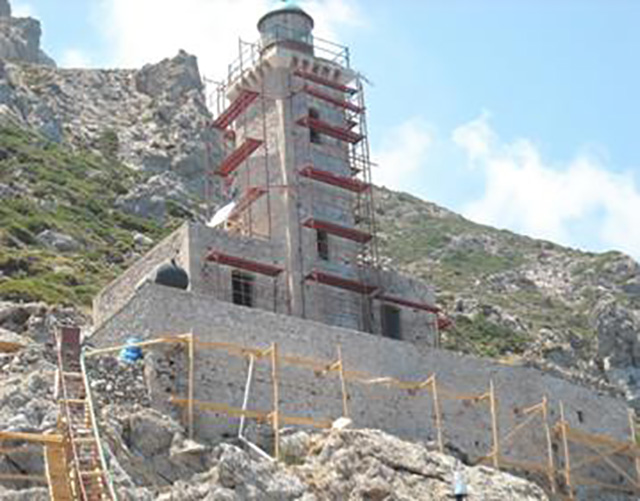 Short Description
The Aikaterini Laskaridis Foundation restored and renovated the stone-built lighthouses of Capes Tainaron and Maleas and the Dana lighthouse of Poros island.

For this reason, in April 2008 the Foundation’s Board of Directors decided to sponsor the complete renovation and restoration of the lighthouse of Cape Tainaron, owned and operated by the Hellenic Navy. That was the first step of a wider undertaking for the promotion of Greece’s stone lighthouses. The restoration and resurgence of a major monument of our broad cultural tradition is a milestone contribution from the Foundation to Greek Maritime Tradition.

Renovation and restoration of the Cape Tainaron (Matapan) lighthouse

In 2008, the Aikaterini Laskaridis Foundation decided the funding of the new restoration. Following consultations with the Ministry of Mercantile Marine, the Ministry of National Defence, the Hellenic Navy and its Lighthouses Service, extensive conversation took place concerning the details and methods of funding and repair as well as the selection of the architect and crew, and the detailed course of action was formed.

After the arrival of architect Dimitris Eftaxiopoulos on the site of the Tainaron Lighthouse, which was the first location of the restoration plan, the existing condition of the lighthouse was appraised and a complete work schedule was designed in collaboration with the Lighthouses Service. The final study was approved by both the Foundation and the Lighthouses Service, as well as the Modern Monument Service of Patras, with technical support from the School of Engineering of the Aristotle University of Thessaloniki. 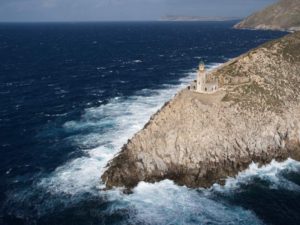 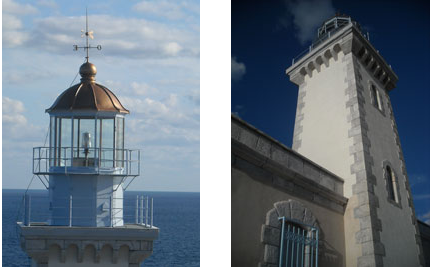 The Cape Tainaron Lighthouse after its restoration

Renovation and restoration of the Cape Maleas lighthouse

The historical stone-built Lighthouse of Maleas has stood on the southern end of Peloponnesus, on the Cape of Maleas, since 1883. Its name is closely connected to danger, as traversing Maleas has always been considered a nightmare by seafarers.

The proceedings for the lighthouse’s restoration commenced on May 23rd 2009, following two ineffectual attempts by the crew to reach the lighthouse area, which were hindered by sea turbulence. Over the next six months, the crew worked under the supervision of the architect and with the unconditional support of the local community.

The crew worked under particularly grueling circumstances, struggling with interruptions caused by sea storms, which also obstructed their supply of tools and food. The problems culminated a month prior to the project’s completion, when yet another sea turbulence led to the destruction of the berth platform.

The complete restoration of the Lighthouse of Cape Maleas was concluded in November 2009 and the Lighthouse was consequently turned over to the Navy’s Lighthouses Service.

Further actions for the promotion of the stone-built lighthouses of Greece as memorials of our vast historical past are being planned, including:

a) The declaration of as many stone-built lighthouses of Greece as possible as protected monuments by the Hellenic Ministry of Culture and European institutions.
b) The establishment of a study, research and data accumulation center regarding the stone-built lighthouses of Greece operating within the Foundation, in order to form a core for the collection and application of both printed and digital material on Greek lighthouses. 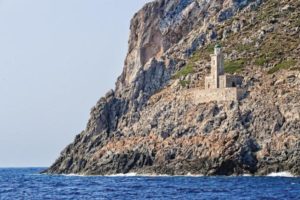 The Cape Maleas lighthouse before the restoration work 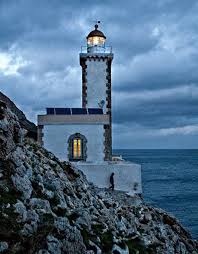 The Cape Maleas lighthouse after its restoration

Renovation and restoration of the Dana lighthouse in Poros island

During the past six months, the Aikaterini Laskaridis Foundation concluded the complete and thorough renovation of the historical stone-built lighthouse of Dana, in Poros island.

With this project valuable historical monuments of our marine cultural heritage are fully restored and turned over to the Hellenic Navy in perfect condition.

This effort is connected to the declaration of these lighthouses, already protected buildings, as monuments of significant cultural importance, with the assistance of the Ministry of Culture and Sports, the Hellenic Navy Lighthouses Service and the Aikaterini Laskaridis Foundation.

The stone-built lighthouse of Dana, dominating the entrance of the Poros bay, was in extremely bad condition–caused by great damages, older modifications, and vandalisms–and its full restoration needed great efforts, enthusiasm and expenses.

The result, though, is impressive, and the renovated lighthouse is today an ornament for the area of Poros and a reminder of the value of these important cultural monuments of our marine heritage.

The lighthouse building and its housing facilities were fully restored to accommodate both the lighthouse keepers that will be stationed there and its many visitors. For complete energy sufficiency, the building was equipped with photovoltaic systems (that in no way affect the aesthetics of the area or the lighthouse itself). 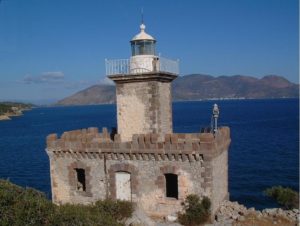 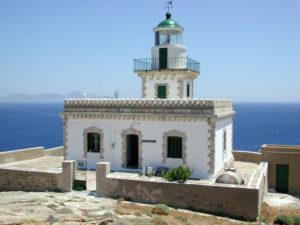 All renovation work was performed by the specialist teams that have also restored the lighthouses of Tainaro and Malea, under the supervision of architect Dimitris Eftaxiopoulos, with the invaluable contribution of the local community of Poros island and the Hellenic Navy Lighthouses Service.

As in the two previous instances, this important project is dedicated to the memories of Aikaterini Laskaridis and Konstantinos Laskaridis.