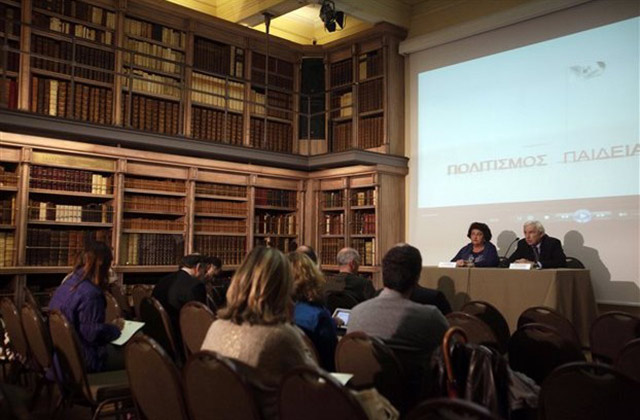 Date
December 10 2014
Short Description
On Wednesday, December 10 2014, at 19.00 an academic event titled "Return to Antikythera" was held at the Aikaterini Laskaridis Foundation. The event took place in the Foundation's renovated building, which houses its Historical Library and its Maritime Collection.
The Aikaterini Laskaridis Foundation hosted the academic event “Return to Antikythera” on Wednesday, 10 December 2014, at 19.00. The event was presented at the Foundation’s newly renovated premises, which also host its Historical library and Maritime Collection. Attendants crowded the building of 36 2nd Merarchias St & Aktis Moutsopoulou, in Piraeus, in order to view the findings of the recent underwater research. This marked the first occasion where the public had access to these findings, which are normally guarded and conserved by the Ephorate of Underwater Antiquities. Special permission for the transportation and exhibition of these objects was granted by the Hellenic Ministry of Culture and Sports, as well as by the Ephorate of Underwater Antiquities.
The event opened with an introductory address from the Minister of Culture and Sports, Mr. Constantine Tasoulas, who praised the “Aikaterini Laskaridis Foundation” for its unwavering commitment to culture and education in Greece and abroad, as well as for its invaluable contribution to the underwater research of the shipwreck of Antikythera. The Minister also expressed his deep appreciation for all institutions and individuals involved in the research and his gratitude for their impeccable collaboration with the Ephorate of Underwater Antiquities. Mr. Tasoulas highlighted the significance of the project in question as an example of the benefits to be reaped by the cooperation of public and private sectors.
The event was also introduced by the R & D Director of Hublot, Mr. Mathias Buttet.
The introductory speeches were followed by a presentation by Mr. Panos Laskaridis, president of the “Aikaterini Laskaridis Foundation”. Mr. Laskaridis welcomed all attendees to the Foundation’s renovated headquarters, introducing the Historical Library hosted there which includes over 280.000 volumes. He also made extensive reference to the Foundation’s educational programs, which are attended by more than 20.000 students of Primary and Secondary Education annually. Mr. Laskaridis then discussed on the Foundation’s support of the project “Return to Antikythera” throughout its duration, by putting the ship “GLAROS” at the disposal of the team for accommodation as well as for logistical support on site;  and by aiding the research team wholeheartedly in preparing and carrying out the actual research and excavation. Having provided the audience with his own, uniquely personal perspective of those events, Mr. Laskaridis thanked the Minister of Culture of Sports, Mr. Tasoulas for his gracious permission that gave the event’s attendees the singular opportunity to view the excavation’s findings first-hand.
The Director of the Ephorate of Underwater Antiquities, Mrs. Aggeliki Simosi, presented a detailed account of the research activities concerning the shipwreck of Antikythera from 1900 to the modern day, highlighting its significant role in the establishment of underwater archaeology as a major area of interest in the world of Greek science. Mrs. Simosi referred to the original discovery of the ship by sponge divers from Symi and to the process of hoisting the wreckage back to the surface, under the care of Captain Dimitris Kontos, Antiquity Curator Panagiotis Kavvadias and Minister Sp. Stais, among others. That era’s findings include the Antikythera Youth and the Antikythera Mechanism. An additional search into the wreckage was conducted by Jacques Yves Cousteau in 1976, bringing to light other parts of the ship’s construction, as well as works of art, among other findings. Mrs. Simosi underlined the fact that it was Cousteau’s research that led to the founding of the Ephorate of Underwater Antiquities by Antiquity Curator Georgios Papathanasopoulos. Since then, the Ephorate has been tirelessly working to bring hugely significant discoveries to the public. The project “Return to Antikythera” began in 2012, utilising cutting-edge technology and with the full support of the Woods Hole Institute, under the direction of Brendan Foley. At the end of her speech, Mrs. Simosi acknowledged the success of this year’s excavations, culminating in the uncovering of major findings. She concluded that “the shipwreck of Antikythera offers us a glimpse into the diversity of its cargo. This validates the theory according to which luxury goods were traded throughout the Eastern Mediterranean, whether obtained via commerce or looting – through maritime transports – delivered to wealthy collectors in Italy. The ship that sank at Antikythera was not merely a cargo ship; it was essentially a floating Museum”. 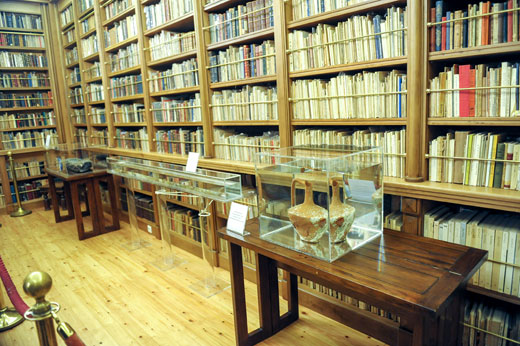 Mr. Theotokis Theodoulou, Maritime archaeologist in the Ephorate of Underwater Antiquities of the Hellenic Ministry of Culture and Sports, explored the significance of the individual and collective work done by researchers regarding the shipwreck of Antikythera from 1900 until today. The findings and first conclusions of the underwater excavation were then presented.
The field project’s scientific aspects were addressed by Mr. Brendan Foley, Research Specialist in the Deep Submergence Laboratory of WHOI’s Department of Applied Ocean Physics and Engineering. Mr. Foley emphasised the importance of mapping the shipwreck not only for this year’s undertaking, but most crucially for future scientific research. It was the mapping that led scientists to more specific evaluations regarding the dispersion of the findings as well as guiding the plans for future expeditions. He also presented all scientific designs for the next five years of underwater excavations. In conclusion, Mr. Foley expressed his gratitude to the Maritime archaeologists of the Ephorate of Underwater Antiquities of the Hellenic Ministry of Culture and Sports. Concluding, Mr. Foley thanked the Hellenic Ministry of Culture & Sports, the Ephorate of Underwater Antiquities and the sponsors and institutions, whose support and commitment to the project resulted in the successful outcome of this year’s research and provided the groundwork for the continuation of an already successful collaboration in the future. 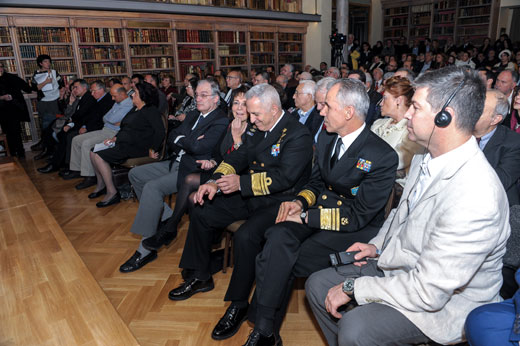