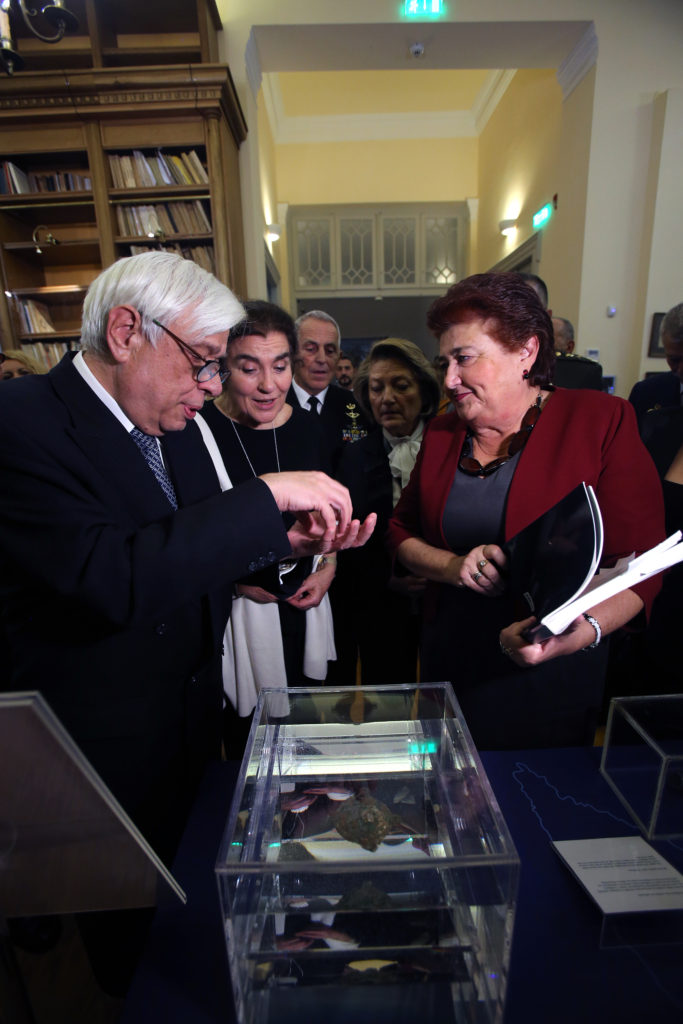 The Aikaterini Laskarides Foundation is once again glad to host the findings from the latest excavation campaing at the Antikythera Shipwreck. Thirty-seven objects from the excavations carried out from 2014 to September 2017, including fragments of bronze statues and the bronze discoid object bearing a bull -as revealed by the X-rays- are presented in the exhibition “The Antikythera Shipwreck – The Adventure Continues” at the building of the Historical Library.

The inauguration took place during a closed event on Monday 11 December 2017 by H.E. the President of the Hellenic Republic Mr Prokopios Pavlopoulos, a happy coincidence for the 10th anniversary since the establishment of the Aikaterini Laskaridis Foundation. At this event, which was honored with the presence of the Minister of Culture and Sports Mrs Lydia Koniordou, the President of the Foundation Mr. Panos Laskaridis presented the Foundation’s multi-faceted work and pledged to continue its activities. Mr. Pavlopoulos in his speech praised the Foundation’s contribution to Culture and Education, “[…] which consists in highlighting the richness and historical depth of Hellenic Culture but at the same time providing many opportunities for our youth and our teachers to acquire further knowledge and talent, through the various activities which the Foundation is developing.” In addition, he extensively referred to the significance of the Antikythera Shipwreck and the importance of the findings, such as the Antikythera Mechanism. In closing, he wished the Foundation’s contribution to continue and set an example to be imitated, “above all in these difficult times, which should not bend us but, on the contrary, we must get the strength to prove what the centuries of our history are testifying: Greece and its culture are not going to “die”, we owe it to the Greek nation, to Europe and to all mankind. “