Friedel A. de, The Greeks, Twenty-four Portraits of the principal Leaders and Personages who have made themselves most conspicuous in the Greek Revolution, from the Commencement of the Struggle, (London, 1830) 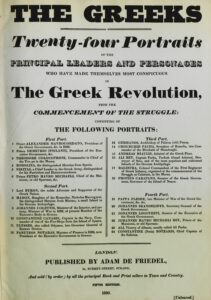 The Danish Adam Friedel (1780- ?) served as military official during the Napoleonic wars. After the wars, he accompanied a Danish nobleman on his journey to the Ottoman Empire. Friedel was initiated to Filiki Etaireia and, after several voyages and missions to Russia, ended up in Zakynthos. At the beginnings of the Greek War of Independence he was in the Peloponnese, and enlisted voluntarily in the Greek military forces, styling himself lieutenant Baron Friedel von Friedelsburg, of aristocratic descent.

Friedel became closely acquainted with Kolokotronis, Nikitaras, Petrobey Mavromichalis, Markos Botsaris, Demetrios Ypsilantis, Ioannis Kolettis, Alexander Mavrokordatos and others. Through his knowledge of foreign languages and his culture, he gained Demetrios Ypsilantis’ trust, and was assigned several missions. However, in June 1822 a fellow Danish lieutenant revealed Friedel’s lies about his lineage.

Friedel was then expelled from the regular Greek Army. In 1823 he travelled to Egypt intending to collect money for the Greek Struggle from his fellow countrymen residing in that country.

In 1824, Friedel was in Mesolonghi with Lord Byron. When I.I. Meyer published a warning to philhellenic societies, advising them to avoid Friedel, described as a crook, in the journal “Ellinikia Chronika”, Friedel took refuge in London, where he opened a lithographer’s shop.

In 1825 and 1826 Friedel printed and published, both in Paris and London, twenty-four lithographs with portraits of politicians and eminent military figures of the Greek War of Independence. He had drawn the portraits himself, in most cases from nature, while J. Bouvier coloured and lithographed these images.

The series was very successful, in Europe as well as in the USA and India, and was repeatedly republished down to 1832, thus helping the efforts of the Philhellenic committees to promote the Greek cause in Europe.
Due to health reasons, Friedel was forced to leave England and settle in southern France and later Italy. In 1849, he came to Athens, where he was awarded two important decorations for his contribution to the Greek Struggle for Independence.