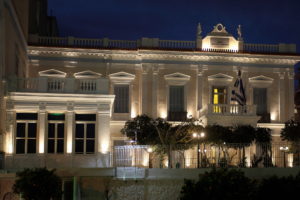 During its many years of presence in our country’s intellectual and cultural life, the Aikaterini Laskaridis Foundation is constantly evolving and has gradually established itself as a prominent influential cultural authority. Its activities are supported by distinguished representatives of all fields of culture and science.

1993
The Kaiti Laskaridou Library is founded in Neo Phaliro by Konstantinos Laskaridis in the memory of his late wife Kaiti.

2000
The yearly Kaiti Laskaridou Literary Competition is inaugurated. Eligible to apply are all Secondary Education students of the prefectures of Piraeus, Cyclades and Dodecanese.

2006
The offices of the Kaiti Laskaridou Library are relocated to a neoclassical building in Piraeus, on 169, Praxitelous and Bouboulinas Str., as the Library becomes part of the Aikaterini Laskaridis Foundation.

The Aikaterini Laskaridis Foundation is established by Presidential Decree, with the signatures of the Ministries of Education, Culture, Shipping and Finance. Its founders are Panos and Marilena Laskaridis.

The body of the Foundation’s Scientific Advisory Committee is formed.  The member of the Academy of Athens and Professor of the University of Cambridge Athanassios S. Fokas is elected President of the Committee.

2008
The renovation and restoration of Greek lighthouses begins. The first renovated lighthouse is that of Cape Tainaron (Matapan), with the Lighthouses of Cape Maleas (2009) and of Dana, Poros (2011), to follow.

The archive of Kostoula Mitropoulou is donated to the Foundation. A specialist team undertakes the processing and classification of the archival material. The project is completed in September 2010.

2009
The Foundation’s new building on 36, 2nd Merarchias and Aktis Moutsopoulou Str. opens its doors. Widely known as the Stringos mansion, the building for years has been the headquarters of the French Institute in Piraeus.

The Library’s Maritime Section is organized.

The Foundation starts a cooperation with the City University London, hosting in its premises the University’s LLM in Maritime Law.

2010
The Maritime Collection of the Aikaterini Laskaridis Foundation is presented to the public for the first time.

The digitization of old and rare publications and archival material relating to lighthouses begins.

The Agreement of Cooperation between the libraries of the Aikaterini Laskaridis Foundation, the Eugenides Foundation and the University of the Aegean is signed; the creation of the Triangle of Maritime Libraries is decided.

The Foundation acquires the Library of Baron Leo Delwaide, one of the most important libraries internationally in bibliography and scientific periodicals on the subject of International Maritime Law.

The Social Solidarity Programme is implemented; in cooperation with the Municipal Welfare Service of Piraeus and the Doctors of the World (MDM) is responsible for providing meals to minors from families facing serious financial problems.

2012
The Foundation establishes its Historical Library, which includes archives and libraries donated to the Foundation by important personalities of Letters and Sciences.

The 1st National Literary Competition in memory of Kaiti Laskaridou, addressed to Secondary Education students, is announced. From then on, the Competition is held annually.

The Lending Library is relocated to a new building on 173 Kountouriotou Str. The building provides a Reading Room and a Computer Room.

The Aikaterini Laskaridis Foundation presents for the first time on the internet Travelogues: Travellers’ Views, a groundbreaking project on the most significant travellers’ editions, concerning the Greek world, through the website http://eng.travelogues.gr/. This valuable material is indexed, documented and digitized, and includes more than 6,000 publications and over 15,000 images.

The Foundation becomes actively involved in the project “Return to Antikythera”, in cooperation with the Woods Hole Oceanographic Institution of Massachussets and the Ephorate of Underwater Antiquities of the Hellenic Ministry of Culture.  The project is a systematic return to the ancient Antikythera Shipwreck, and will continue in the next years.

The Historical Library of the Aikaterini Laskaridis Foundation, is inaugurated by the President of the Hellenic Republic, Prokopis Pavlopoulos.

A Memorandum of Understanding is signed with Panteion University of Social and Political Sciences.

A Memorandum of Understanding is signed with the Hellenic Navy.

A Memorandum of cooperation is signed with Tsinghua University in Beijing.

The 1st National Poetry Competition “George N. Carter” is announced. From then on, the Competition is held annually.

The naval exhibition with letters and items of Lord Admiral Horatio Nelson, part of the Foundation’s Maritime Collection, is exhibited at the Maritime Museum of Crete, at the Firka Fort at the harbor of Chania.

A conservation lab for books and paper is organized and established within the Historical Library.

Marilena Laskaridis, the heart and soul of the Library, passes away suddenly.

The application and website ToposText – Greek literature in its landscape go live.

The Aikaterini Laskaridis Foundation participates in the internationall Congress of the Aristotle University of Thessaloniki for the 2,400 years since the birth of Aristotle with an exhibition of incunables and early printed editions of Aristotle from the Historical Library.

A periodical exhibition entitled “Nelson and his times” is organized at the Palace of the Grand Master, in the Medieval City of Rhodes, with exhibits from the Foundation’s Maritime Collection.

The periodical exhibition “The Antikythera Shipwreck – New archaeological discoveries” is inaugurated by the President of the Hellenic Republic.

An exhibition entitled “The Greek editions of Aldus Manutius and his Greek collaborators (p.1494-1515)” with Aldine editions from the Historical Library is organized a the Marciana Library in Venice.

The Aikaterini Laskaridis Foundation, in collaboration with the Museum of the City of Athens / Vouros-Eutaxias Foundation, organizes a series of lectures and themed tours in central Athens.

The Panorama Cultural Society donates its rich archives to the Aikaterini Laskaridis Foundation.

The Aikaterini Laskaridis Foundation and the Gennadius Library of the American School of Classical Studies at Athens co-organize the international conference “Opening up private and religious libraries to scolarship”, within the framework of the annual conference of the Consortium of European Research Libraries (CERL). At the same time, the exhibition “Incunabula. Aspects of Early Greek Printing” is presented, showcasing books from the collections of the Foundation’s Historical Library.

An exhibition of new findings from the underwater research at the Antikythera shipwreck is hosted at the Foundation’s Historical Library.

In December 2018, the Aikaterini Laskaridis Foundation and the Gennadius Library of the American School of Classical Studies at Athens present TravelTrails: Missions and Explorations in the Eastern Mediterranean, 1500- 1830 (traveltrails.gr).

The Velimezis Icons Collection is donated to the Foundation by Christos F. Margaritis, Emilio F. Margaritis and Alexandros G. Makris.

The Symposium “Second Nature. Marine Plastic Waste – Blue & Circular Economy – New Technologies” is organized with the participation of Greek and foreign scientists and experts in environmental issues, circular economy and technology. At the same time, the exhibition “Second Nature – A New Life” is held.

The two-day seminar “China, Greece and the Eastern Mediterranean” is organized in collaboration with Tsinghua University of Beijing.

The fruit of the collaboration between the National Library of Greece and the Greek Libraries Network with the Aikaterini Laskaridis Foundation is the 2019 Summer Reading and Creativity Campaign entitled “Imagine…”.

The Aikaterini Laskaridis Foundation in collaboration with the Historical Archive – Museum of Hydra organized a large exhibition with works of Konstantinos Volanakis, the father of Greek seascape painting.

The Foundation participated actively in the 85th World Congress of the International Federation of Library Associations and Institutions (IFLA) on ‘Libraries: dialogue for change’. The Historical Library hosted the IFLA Satellite Workshop “Doing Research in Real-World Settings: Telling Your Story and Evaluating Programs through Social Science Research”, while the Foundation actively supported Greek librarians, covering the cost of participation at the conference for 90 people.

The 1st Literary Competition in memory of Marilena Laskaridis for Secondary Education students of all Greek schools abroad begins.

The archaeological research at the Antikythera shipwreck begins again, with the support of the Foundation, giving very important findings.

The President of the Hellenic Republic, Mr. Prokopios Pavlopoulos, inaugurates the permanent exhibition “Faith and Art. Selected Icons from the Emilios Velimezis Collection”.

The Aikaterini Laskaridis Foundation, in collaboration with the Chinese Academy of Social Sciences (CASS), establish the Centre for China Studies, with the aim of strengthening scientific and cultural links between the two countries. The first joint event of the Foundation and the Chinese Academy of Social Sciences is the conference “Greece-China relations and the Belt and Road Initiative”.