RETURN TO ANTIKYTHERA 2021-2025: Results of the first expedition 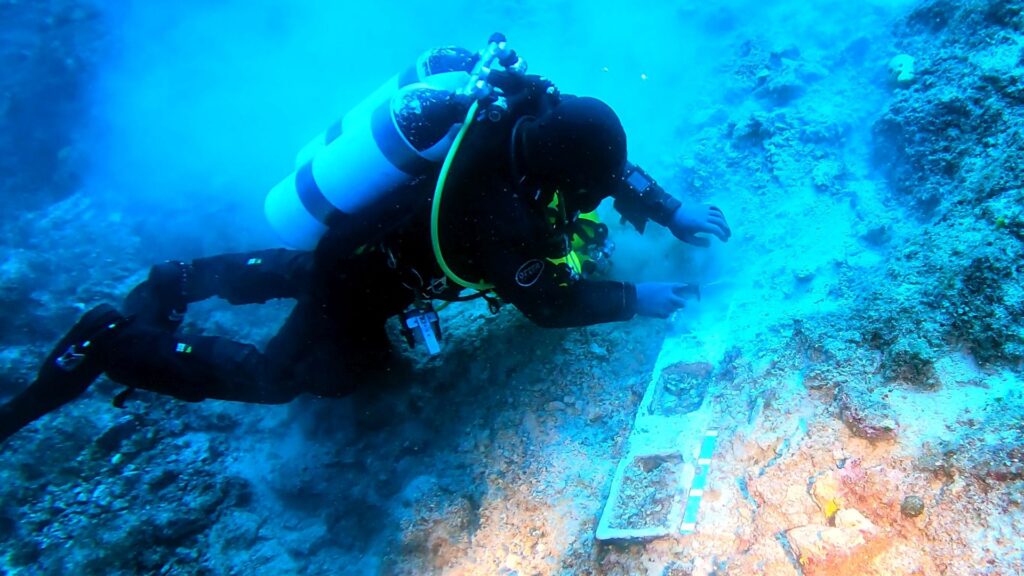 The first expedition, which took place as part of the second five-year underwater research program of the Antikythera wreck, lasted from 1 to 10 October 2021. The excavation at the famous shipwreck, where the Antikythera Mechanism was found together with many other artifacts, is a landmark in the history of underwater archeology, and is still keeping great surprises to the scientific community and the general public.

The mission focused on the detailed documentation of the site and the creation of a complete photogrammetric 3D model of the wreck in high resolution. This allows, on the one hand, a much more accurate analysis of the distribution of finds in the submarine ground, which is fundamental to the accurate representation of the shipwreck in the 1st century BC, and, on the other hand, the introduction of a new cutting-edge tool for accurate planning of further research.  The successive integration of new and older findings in the model will result in the complete documentation of the wreck. It also provides the ability for virtual access to the site, even via the internet.

During the expedition, most of the area around the wreck was also documented, providing new and important information that will be investigated in future missions.

The goals of this year’s short mission were achieved to the fullest, despite the difficult weather conditions prevailing at the spot.

The most important find is a part of a marble statue, which is trapped under a boulder. The initial analysis and documentation of the object was carried out by field photogrammetry, while its further investigation will be carried out in due course. During the search, smaller wooden and bronze elements from the vessel were recovered, as well as fragments of pottery, which provide valuable information on the dating and composition of the cargo. Together with the other findings that future excavation missions are expected to yield, they will contribute to a more complete understanding of the valuable cargo carried by the ship.

The research program is led by Dr. Angeliki Simosi, Head of the Ephorate of Antiquities of Euboea, and Lorenz E. Baumer, Professor of Classical Archeology at the University of Geneva. The field teams were coordinated by Captain Alexandros Palatianos and the underwater research was led by Alexandros Sotiriou, a collaborating archeology researcher at the University of Geneva. At the mission participated members of the Special Diving Team of the Submarine Missions Unit of the Coast Guard, who used mixed gas diving devices, the diving archaeologist Orestis Manousos and the Italian researcher Dr. Elisa Costa of Ca’ Foscari University of Venice.

The research is conducted by the Swiss School of Archeology under the supervision of the Ephorate of Underwater Antiquities, and funded by the Akaterini Laskaridis Foundation and the Swiss watchmaker company Hublot. The Athanasios K. Laskaridis Public Benefit Foundation offered the vessel Typhoon, whose contribution is important for the success of the mission, while Cosmote covers the telecommunication needs of the expedition. The research is actively supported by the Municipality of Kythera and the residents of Antikythera.

The research is under the auspices of H.E. the President of the Hellenic Republic Katerina Sakellaropoulou.

Visit the official website of the research team at the following link: http://antikythera.org.gr.